​Betty was born on August 15, 1920 in Alameda, CA. Soon after, her father Albert Deuser, a printer, moved Betty, her two sisters, a brother, and his wife to Oakland, CA. They lived close to Oakland Airport where Mr. Deuser took the family for various events and Betty discovered her interest in flying.

In 1937, Betty graduated from Castlemont High School and went to work as a private secretary in downtown Oakland. While in high school, Betty was the editor of the school newspaper and yearbook.

In 1941, she applied to the Civilian Pilot Training program where she earned her private pilot license at West St. Airport in Concord. Her flight training at Concord was paid for by a scholarship she won in a competition sponsored by the Oakland Chamber of Commerce. After the bombing of Pearl Harbor, her flying had to be done high in the mountains of Plumas National Forest at Quincy, CA.

After accumulating 75 hours of flying time and upon hearing about the women's flying program being started by Jacqueline Cochran, Betty wrote for information on the program. The reply she received was a request to head for training in Houston Texas.

Betty joined the 3rd class of trainees which included Lois Hollinsworth, Lois Brooks , Emma Coulter, Dora Dougherty, and 43 others to start training in January, 1943. While in Houston they learned to fly Taylorcraft, Cub Aeronca, PT-19s, BT-13s, BT-15s, and UC-78s. Training was moved to Sweetwater, Texas, before graduation.

Near the end of Betty's training, Jacqueline Cochran, was in Sweetwater with a reporter and photographer from LIFE magazine. Betty, Jackie, and others were captured on a half page picture on page 74 of the July 19, 1943, issue, see below. 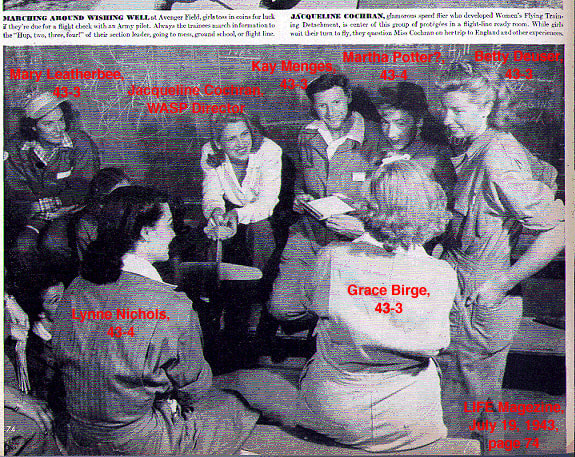 Read Betty's letters home, 1943-1944.
​Her initial assignment after graduation on July 3, 1943, was to Love Field, Dallas, TX. She was only there a few days when she, the two Lois' and Emma were called to Washington, DC to meet with Jackie Cochran and General Hap Arnold. Here they found out that they were not going to be ferrying new planes. The program was being expanded to use these women for other tasks. By the end of July, 1943, they were reassigned to Camp Davis, NC, flying tow target for anti-aircraft troop training.
​Along with training on the PQ-8, Betty also logged time with the A-24 Douglas dive bomber, A-25 Curtiss Helldiver, B-34 Lockheed bomber and various Beechcraft AT's.

When flying was limited due to weather or other circumstances, Betty would help out around the airplane modification shop. She helped the mechanics install the overpower units in the PQ-8s, which allowed any onboard pilot to override the radio control if needed.

Eventually, Betty, Lois H, Lois B, Emma and others from 43-3 were sent to Biggs Field, El Paso, TX. They were there for about a year, when the WASPs were disbanded to make room for the men coming back from the war.

In January, 1944, Betty married Sergeant Fred Budde. In the summer of '45, they moved to Victorville, CA., and went on to raise four sons.

My thanks to Betty, one of my mother's long time friends, for all the biographical material that she provided to make this page possible. I hope to do many more such pages. 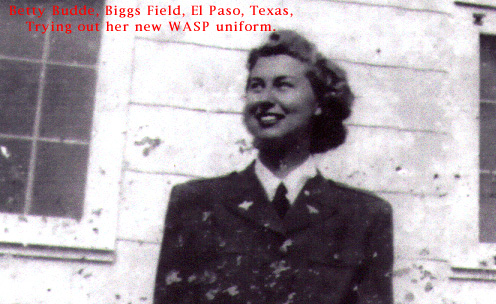 ​On March 10, 2010, all the WASP were awarded the Congressional Gold Medal. Betty was one of 79 WASP from California honored.