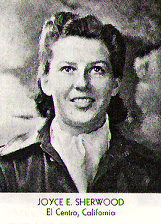 Page available since 10/11/2002 - last updated 11/23/2011
​Information for this page was obtained from the books "Out of the Blue and Into History", by B. S. Turner and "On Final Approach", by B. H. Granger, and an accident report provided by Craig Fuller. Additional pictures and information were provided by friends and Joyce Secciani.
Joyce had always wanted to fly - probably from the day she was born, which was December, 1921, in San Diego, California, where she lives today. She spent all of her school years in El Centro and upon graduating from high school, signed up for the government sponsored Civil Pilot Training program at Central Junior College.
Joyce was interviewed for recognition by Congress with the Congressional Gold Medal.