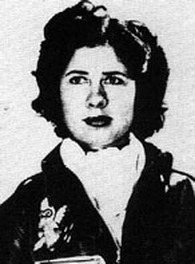 The following is a summary about the only WASP who disappeared without a trace and was facilitated by Terence Geary who contacted me in April, 1999, about a microfilm he had of the complete Army accident report about Gertrude. Note in this report that she had over 850 hours of flying time, 46 hours of those were in the P-51, and 17 of those were in the D model she was flying at the time of her disappearance.

Find out about Gertrude's family's effort to find her.

At 12:00 on October 26, 1944, in the Long Beach Control Office, Gertrude and 40 other pilots were briefed on ferrying new P-51s from the North American Aviation factory at Mines Field, Los Angeles Municipal Airport, Inglewood, California, to Coolidge Field, Arizona by the Long Beach briefing officer, Capt. Hershell L. Abbott. The pilots were given current weather conditions for Mines field, but the only information entered on Form 23 was that the weather was O.K. They were also given instructions that if they didn't depart by 15:18, they would have to stop at Palm Springs, California, to avoid flying at night. The pilots departed for Mines Field by bus at 13:00.

A list of these pilots, their plane numbers, and destination, was delivered by Capt. Abbott to the North American Aviation Supervisor for Flight Operations, Mr. Bud Noon, at the North American FLight Operations Office, Mines Field. Mr Noon called this list into the LA Municipal Airport control tower, where operators copied the list and used it to record the time of departure for each plane.

This list became the flight plan normally recorded in section D of Form 23. Standard procedure required that the flight plans be called into the proper traffic control authorities from section D. (More on this below, see Deviation from standard AF regulations.)
​Weather Conditions:

Weather conditions at Mines Field, LA Municipal Airport, near the North American factory were clear but with a layer of haze up to 2,300 feet. There was also fog reported over Santa Monica Bay.

Another WASP, Dorothy Hopkins, class of 43-6 , reported in a statement made for the investigation that, "At 2,500 to 3,000 ft., it was impossible to see the ground or water." Other pilots reported that the haze was much thicker over Santa Monica Bay, approximating instrument flying conditions.
​Gertrude's Departure - based on statements from the investigation:

Based on a written statement provided by Nelson J. Hass, a fireman for North American who was on duty at the time, Gertrude took off at 15:42 in aircraft number 669. This was based on a log that was kept by the fireman. According to Capt. Troy A. Burris, a copy of the actual log was not provided to the Air Force, "as the Fire Department at North American does not wish to have a copy of that record included in a statement."

Another witness, Merle Dobbings, North American Leadman on Delivery Line, reported that her plane was taken to the side for a minor repair of a "bent door", released by the inspectors, and taxied by Gertrude to the runway "at approximately 4:00 p.m." Gertrude told Merle, before the repair, that she was not in a hurry since she was only going to Palm Springs.

From a recording of tower transmissions kept by the control tower, flight 669 was cleared into position, cleared for take-off, and given a time check at 15:42. However, this was not documented in the list, flight plan, phoned into the tower by Mr. Noon. Capt. Troy A. Burris also noted after reviewing this recording that this information "cannot be certified as the transmission was not clear and the aircraft number cannot be positively identified."
​Discovering Gertrude was missing :

Later that day, a call was made by the Dispatch Office at Long Beach Army Air Field, where the P51 pilots originated from, to the LA Municipal Airport control tower requesting information on the departure time for aircraft number 669. They reported it had not departed. The next day another call was made and this time it was reported the plane departed but that the time was not known.

On October 30, 1944, Gertrude's home station the 5th Ferrying Group, Love Field, Dallas, Texas, requested the where abouts of WASP Tompkins, since no RONs had been received from her. It was finally noticed that her plane, number 669, was not included in the flight plan list of names called into the LA Municipal Airport control tower nor was it reported to any Airway Traffic Control. She was not noticed as being missing until this date.
​Search Effort to find Gertrude:

On October 31, 1944, a search effort was initiated. It covered a large section of southern California westward to Arizona and the southwest corner of Arizona. The search effort included several groups from the Air Force, the Coast Guard which searched Santa Monica Bay, and the Civil Air Patrol. Before the search effort was abandoned, 156 aircraft were used and over 1,067 hours of flying time were put in. 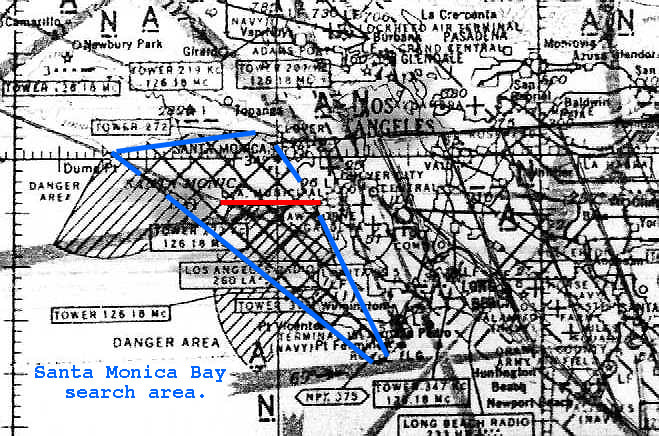 ​Gertrude's father, Vreeland Thompins and her husband, Henry M. Silver, were informed of her disappearance on November 2, 1944.

On November 16, 1944, the Civil Air Patrol reported possible wreckage near Toro Peak in the Santa Rosa mountains and a land search group was organized by the 21st Ferrying Group from Palm Springs. As reported in a telex to the Chief of Flying Safety, the search party reached the site on November 18, but found only "a rock that that appeared to be an aircraft from the air." At that point, the search was abandoned. No trace of Gertrude or her plane have ever been found.
Notification of Next of Kin:

From the report by Capt. Troy A. Burris, "It is possible the aircraft was lost in Santa Monica Bay, as visibility was poor.... Engine failure could have occurred shortly after take-off, causing the aircraft to crash into the bay."
​Deviations from Army Air Force Regulations:

As can be seen from the above, several SNAFUs were revealed during the investigation of the disappearance of Gertrude Tompkins. Basically, Form 23 was not used in complete compliance with Army Air Force regulations. The weather section was filled out at Long Beach well before departure and sections D, E, and F, were not properly used since departure was not at an Army controlled base.

The original list of pilots prepared at Long Beach and delivered to North American was never found during the investigation. What was found were notes made by the control tower. These notes were used to create a list that became a substitute for Section D, Flight Plan, of Form 23. Note that pilot Tompkins is shown flying aircraft number 692. Also, according to Lt. Col. Earl E. Myers, aircraft number 692 was originally listed for WASP Dorothy Hopkins, mentioned above. Neither aircraft number 669 or WASP Hopkins are listed on the control tower list.

According to the report by Major Charles I. Longacre, the deviations from Air Force regulations grew out of procedural changes over the preceding months. Originally, North American Aircraft pilots delivered the P-51s to Long Beach where the Air Force adhered to regulations via Form 23 for flying of any aircraft. Over time, the production of the P-51 was increased and North American requested that they be relieved of delivering the planes to Long Beach and that instead the pilots be brought to the factory to pick up the planes. Initially, the request was for just a few pilots. As production grew even more, the number of Air Force pilots coming to Mines Field also grew.

What evolved was a system where a list was prepared and phoned into the North American control tower in lieu of using section D of form 23 to call in the flight plan to the control tower. The weather section, Section C, was completed at Long Beach rather that at Mines Field just prior to departure, and sections E and F were not used since the appropriate Air Force personnel were not located at North Americans facilities.

After this investigation was completed, procedures at Mines Field were changed and Army personnel were added to comply with regulations and proper use of Form 23.
​Recent Information on Gertrudes' Disappearance:

From a 1996 document, "In Memoriam - Thirty-eight American Women Pilots" published by the Texas Woman's University Press, the four WASP authors stated in the section on Gertrude, "HQ Air Force Safety Agency reported, June 8, 1994, that no wreckage of this mishap has been located." Also, on July 21, 1998, I received a message from Walter Witherspoon that a "prominent 'wreckchaser' in the So. Cal. area is interested" in locating the wreckage of the P-51D.
​Form 23 - Aircraft Clearance:

Form 23 documented all relevant events for the flight of every Army aircraft. Section A was filled in by Operations at the base of departure. Section B, the names of the pilot and any passengers, and part of Section D, listing intended destination, were filled out by the pilot. Section C was filled in by the Weather Office and given back to the pilot. In this case, Section C was filled out hours before the actual flight. The pilot then completed section D, which became the flight plan. Section D was reviewed by an Army clearing authority, not available in this case, who then signs in Section E, Clearance Authorization. The pilot then fills in Section F, indicating departure conditions, and hands the original to an Army line crewman, also not available at Mines Field. The pilot keeps the yellow copy to complete section G upon arrival and hands it to a line crewman.

All ferrying pilots were required to report in each day to their home station with a RON while they were delivering an aircraft.