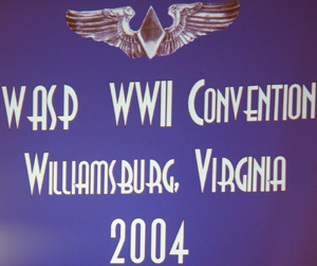 ARRIVAL AND RECEPTION
Over 100 WASP and a similar number of kids and friends started arriving on Wednesday, September 29, 2004. Rooms near the lobby were set up for hospitality and registration.   The hospitality room included TWU, authors Sarah B. Rickman, Noonie Fortin and Cindy Weigand, Wasp on the Web, the WASP Store, wooden propellers for the WASP to sign, and refreshments. 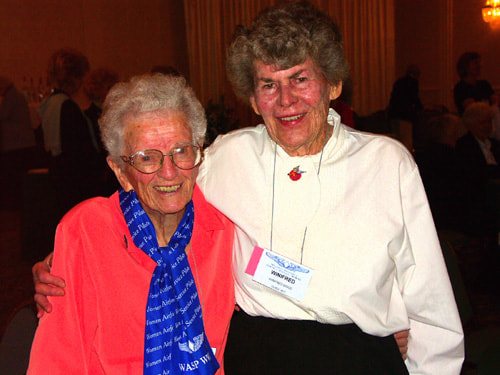 ​Lois Hailey, 43-3, and Wini Wood, of 43-7, who served together at Biggs Army Air Field in El Paso, Texas, take a moment to pose during the Thursday evening reception.   The reception was followed by a sing along. 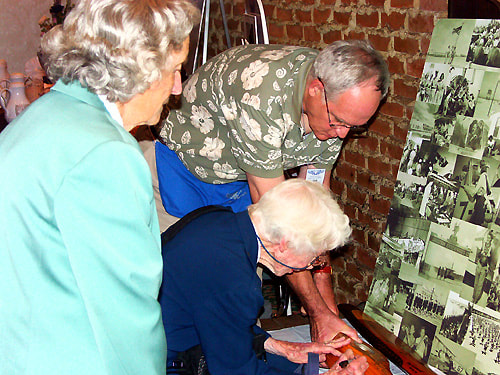 ORAL HISTORIES
​Throughout the reunion, there were three efforts to capture the history of these women of history and their personal stories.   TWU had 5 students collecting oral histories for the WASP archives.   They captured the stories of 25 WASP.

In addition to the TWU group, there was a team from Valencia Community College in Orlando, Florida.   Including Janet Reno, they completed 17 interviews.

One other effort was undertaken by Victoria Pope, Managing editor for U.S. News & World Report. 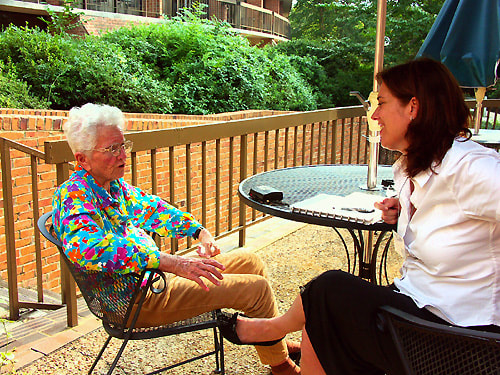 Lois Hailey, of 43-3, spent about 30 minutes talking with Victoria Pope, of U. S. News & World Report

Initially, Linda found a log book and other items related to her mother's short time with the WASP training program.   She then contacted the national archives and obtained detailed military records.

TWU has received many unproven claims of participation in the WASP program.   This is the first with sufficient detailed proof. 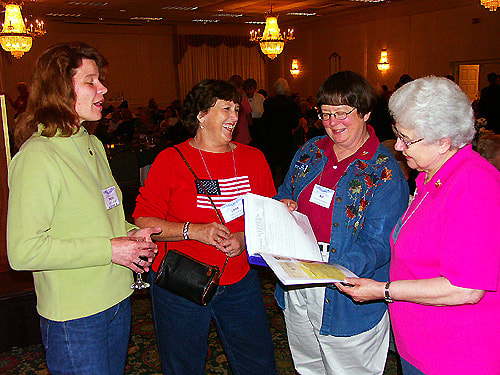 WASP friends, Pat Jernigan and Claire Archambault, review records which offer proof that Virginia Stevenson was a WASP trainee.   On the left is Tracey MacGowan, of TWU.   She will take these records back to the WASP archives at TWU.   Linda, the daughter of Virginia is standing next to Tracey - what a smile.

TWU will work with Sara Haden to get Virginia added to the official WASP roster.
​HAPPY BIRTHDAY - AND ANOTHER SURPRISE
​Chig Lewis, who helped facilitate this reunion, arranged a special surprise for his mother Dot Swain Lewis , of 44-5.  September 30 was her birthday.

In addition to this planned surprise, a large bouquet of roses arrived.   This was surprise to all.   They were sent by a WASP admirer who was not able to make the reunion for all the WASP.
​ 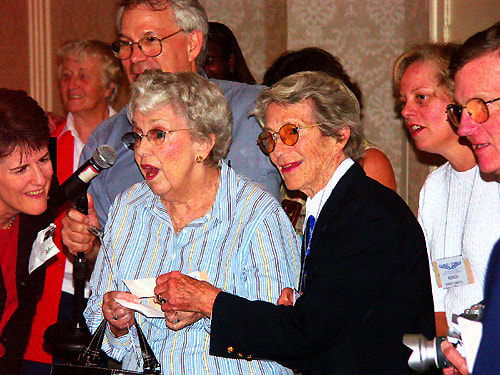 ​TOURS AND CLASS DINNER
​Friday afternoon included a tour of Jamestown and Yorktown.   Some reunion attendees also managed to get up to Washington, D.C.
​
​Friday night was the class dinner.   The WASP were grouped in one dining room so they could spend time with their classmates and the kids and friends of WASP were in an adjacent room getting to know each other.   Claire Archambault and Pat Jernigan joined the kids of WASPs. 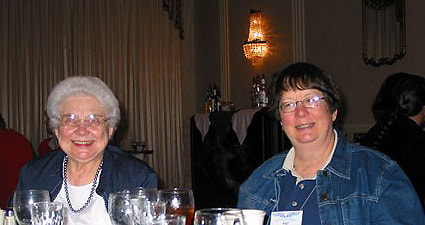 WASP SERVICE AS AAF COMMISSIONED OFFICERS?
In the late 70's, the WASP were finally granted veteran status and provided their DD-214s.   In June of 2002, Irene Kinne England, of class 43-8, became the first WASP to be buried at Arlington National Cemetery.   This was another step in recognizing the service of the WASP, however, more can and is being done to get further recognition.
Pat Jernigan and Claire Archambault, both retired retired Army colonels, are working to get the WASP recognized as commissioned officers.   Pat and Claire presented a report on their efforts at the WASP business meeting.

WASP AUXILIARY FORMED
No more KoW to worry about.
​​Well, it's finally happened.   What started as the Kids of WASPs during the 1992 reunion in San Antonio has become the WASP Auxiliary and it includes kids, relatives, and friends of the WASP.   We have a temporary steering committee composed of Eileen McDargh, daughter of Mary Burchard, 44-6, John Marsh, son of Marie Barrett, 43-7, Doug Durham, son of Lois Durham, 43-7, Pat Thomas, daughter of Audrey Tardy, 43-7, and Albert Lewis, son of Dot Lewis, 44-5.

To get your name added to the WASP Auxiliary database, contact Albert "Chig" Lewis.

WASP MUSEUM OF LEARNING
​Nancy Parrish, daughter of Deanie Parrish, 44-4, provided presentations on the proposed museum that will be built in Sweetwater around the original 1929 hanger.   The city of Sweetwater has already donated 55 acres for the museum.   Funding is underway and needs your help as a charter member.   The more charter members, the better the chances for corporate sponsorships.
​ 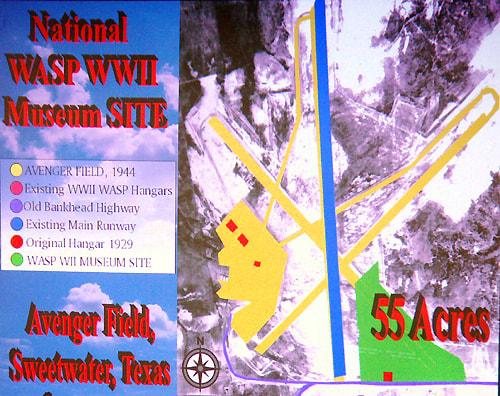 ​BECOME A MEMBER.  There are several membership levels available and donations are always welcome.

LEARN MORE. The centerpiece of this cutting-edge interactive learning museum will be digital video interviews with WASP, instructors and citizens of Sweetwater, as they relive their experiences and make history come alive! WASP will be EVERYWHERE, surrounding visitors and sharing stories in every corner of every exhibit.   Their words will offer colorful examples of the values they have lived by -- honor, patriotism, courage, and service.

​Julia Lauria-Blum Thanks the WASP
Julia Lauria-Blum, a supporter of the WASP and the Airpower Museum at Republic, has worked with her congressman to honor the WASP.   On November 7, 2003, Congressman Steve Israel read the names of the 38 WASP that were killed into the Congressional record.   These remarks were expanded on September 13, 2004.

Julia was presented copies of these proclamations, had them framed, presented them to the WASP, and read a formal statement during the reunion.   Part of her statement included, "My link to the WASP story began in an unlikely place, at an unlikely moment, but has largely allowed me the ability to present the larger story of the WASP of WWII, not out of hero-worship but, like all of us here, an appreciation and admiration of the women who reflect the qualities of the women we've become, hope to become, or hope our daughters to become."

The framed proclamations were then donated to the TWU WASP archives by Julia and Bill Trebing in honor of his sister Mary Trebing.   See related story. 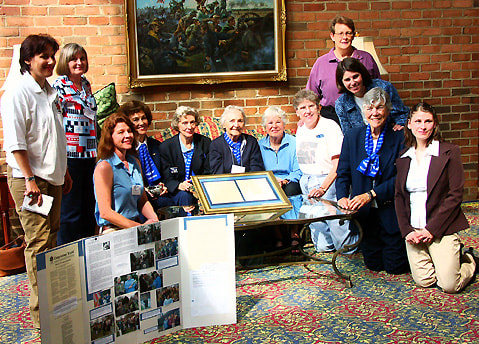 WASP THANKED BY KEY SUPPORTERS
During the Saturday banquet, Katie Landdeck and Janet Reno expressed their thanks to the WASP for helping them become who they are.   Janet Reno is the niece of WASP Winifred Wood, and became Attorney-General of the United States.  Katie became a professor at TWU after earning her Ph.D. in history from the University of Tennessee.   Her dissertation was titled: "Pushing the Envelope: The Women Airforce Service Pilots and American Society.

Janet had the following and much more to add: "taught me how to live", "live constructively", "put aside labels", "move forward with the spirit of the WASP", "You make me soar.", "Thank you so very much.   I love you all."

Katie made these comments to the WASP: "thanks so much for your willingness to share your stories with me.  I could not have reached this point in my life without you.",   "I've spent the past ten years of my life, and of my husband's life, learning about you, writing about you, and now teaching everyone I meet something about you.",   "Thank you all for everything."

WASP HONOR KEY SUPPORTERS
​After Katie and Janet completed their remarks, they were each honored by the WASP for their support and good deeds.   The were made honorary WASP and Dawn Seymour presented them their official WASP wings.   Katie is shown with Pat and Bill Thomas.   Note the inset showing Katie's WASP wings on her dress.

BANQUET ENTERTAINMENT
Nancy Parrish brought the banquet to a close with a multimedia presentation that included thank yous from the Department of Defense, Eileen M. Collins, the first female commander of the Space Shuttle, and excerpts from the kids of WASPs on how they would describe their moms in one word.   The show was concluded with a rendition of We Got the Stuff - The Right Stuff.

WASP TELL 'WAR STORIES'
Sunday morning included breakfast in one of the large dining rooms and lots of WASP stories for the kids and friends of WASP.

Kids Describe Their Mothers at Reunion