THE SEARCH FOR GERTRUDE TOMPKINS' P-51 IS ON AGAIN

Sarah has been named a finalist in the WILLA Literary Awards (named for Pulitzer Prize winning novelist Willa Cather) -- Original Softcover category -- for her WASP novel FLIGHT FROM FEAR.   The award is given by the professional writing organization Women Writing the West for books about women set in the West.   FLIGHT FROM FEAR is set in the heroine's native Colorado and, of course, Avenger Field in Texas. Refer to the press release for more information.

Celeste has been working for years on her book about the WASP training program that started in Houston, Texas, in November, 1942.   The first three WASP classes did most of their training in Houston.   The forth class was split between Houston and Sweetwater.   Her book will be available soon.

The Cameron Diaz WASP movie is not our Sweetwater movie, and has nothing to do with it.   Our project is moving along very well.   We are finishing up some of the last details so that we can start pre production soon.

Madge Leon Moore, 44-4, in the back on the far right, and Dorothy A. Lucas, 44-7, in the back fourth from the left, were present for Cindy's book release party on November 2, 2003, in Georgetown, Texas.   Madge, Dorothy, and 9 others written about in the book, were there to help Cindy celebrate the release of her first book.   Also present at the party was a B-25. 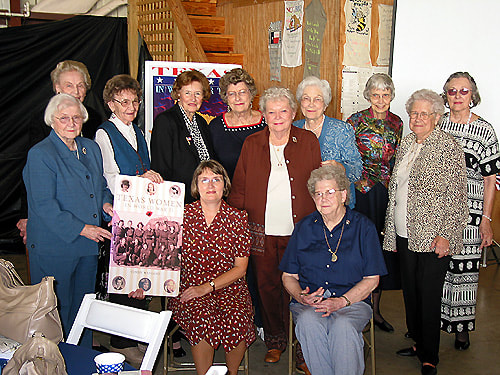