A VIEW FROM THE DOGHOUSE - HOUSTON WASP TRAINING
​As reported last October, Celeste Graves, who supported the WASP training program in Houston, Texas, was getting her WASP book published. With the help of these early WASPs, Celeste has completed her book and gotten it published.  It is currently available on the web from AuthorHouse.com. Soon it will be available at various retailers.

You can get another perspective about the author and her book, from her web site.  "I started to work there in 1940 for Aviation Enterprises as a dispatcher.  My office was a glassed in building sitting on the flight line - so I had a birdseye view of all the exciting happenings.  It was affectionately known as 'The Doghouse.'   At that time Aviation Enterprises had a contract with the U. S. Government to train civilian pilots (mostly male) to fly the 'Army' or 'Navy' way.  It was called the Civilian Pilot Training Program.   It was a very fun job because everyone was doing what they loved best - flying!"

A View from the Dog House, covers the early days of the Womens Ferrying Training Detachment (WFTD) training program.  These early days of the WFTD program were paralleled by another program, the Women Auxiliary Ferrying Squadron (WAFS), which included 28 of the most experienced women pilots in the world.   They averaged 1,400 hours of flying before joining the WAFS program.  Initially, the intent of both programs was to train these women to ferry new aircraft around the country as needed.   Starting in July, 1943, these two programs were combined to form the WASP and other duties were added for these women to fulfill including, tow target, testing, and many others.   Celeste's new book along with "The Originals: The Women's Auxiliary Ferrying Squadron of World War II", by Sarah Byrn Rickman provide the best sources for these early days.

1940 HOUSTON HOBBY TERMINAL BECOMING A MUSEUM
​After years of neglect, the Houston 1940 terminal building, built for Houston's growing commercial air traffic of the 1930s, is coming back to life.   Only this time it is as a museum.   The Houston Aeronautical Heritage Society is making it happen.

Celeste Graves was there when WASP training started.   Her "Dog House" is on the other side of the hanger pictured below. 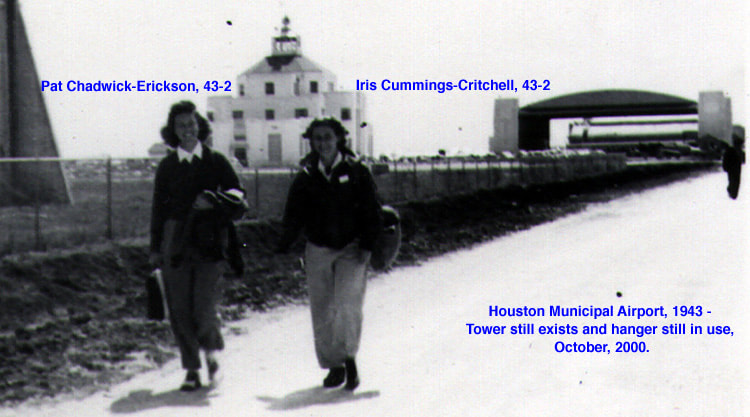 FLORENE WATSON AND CINDY WEIGAND AT 1940 HOUSTON HOBBY TERMINAL
​The Houston Chapter of Women Aviation International held their May meeting and Florene Watson was the guest speaker and spoke for over an hour on her time in both the Women's Auxiliary Ferrying Squadron and the WASPs. She flew every thing they had as a ferry pilot.   Afterwards, she signed Windy's book, in which there is a chapter about her, and answered many questions about her military flying.

Cindy was also there to sell autographed copies of her book, Texas Women in World War II. Cindy is working on other projects, all about women from WWII.

WASP MOVIE MAKING
From the Sweetwater effort, "We are in a holding pattern.   We have gotten a lot of really good feedback on our project.   ... have you guy's gotten any news on the Diaz project? ...   I have heard really awful things about the script that they put out. "   From the west coast, "The scene is quiet.  We have not heard any more from the Sunset Enterprises effort here which sounded like the most promising and most likely to get the stories somewhere close to reasonable."   As for the movie effort with Cameron Diaz, this " ... one was just a speculative flash in the pan.   They had really nothing 'in hand' except access to an old story that had been thrown out by several studios."

WASP REUNION, OCTOBER, 2004
I don't have many details yet, but my mother and I are planning to be there.